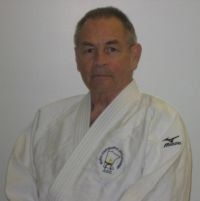 Tom Crone began his judo training in 1960 as a freshman at Mankato State College, Minnesota. He rose to the rank of shodan (1st degree black belt) in three years, having won successive state championships and placing in the First Collegiate National Championships in Colorado Springs, CO, in 1962.

In 1985, he and Michelle Holtze founded North Star Martial Arts Academy. Since, he has trained at the Kodokan Judo Institute, served five years on the National Junior Olympic Coaching Staff, served Judo Minnesota as its Development Chair for 10 years, one term as President, and in 2002 became its Collegiate Committee Chair. He is a member of its Standards Committee. In 2003 he also became the Midwest Coordinator for the United States Judo Association's Collegiate Committee, and its Chair in 2004.

He has been the instructor for the University of Minnesota's academic credit course since 1995. He is Sensei Emeritus of North Star Judo.